The Astley Cooper School is an English comprehensive school (ages 11–18) in Hemel Hempstead. I was invited by Enterprise Advisor Jason Lee and Pre-Apprenticeship Programme Co-ordinator, Richard O’Brien to run a Belbin GetSet workshop for 14 of their students within the pre-apprenticeship programme.

The course is designed for all year 12 students. However, it does tend to attract students who did not manage to pass both their English and Maths GCSEs. The course includes a BTEC in Advanced working skills where the students can learn about business and how companies work. It also includes a six-month work experience placement with local companies, where the students work with employers two days a week. At the end of the academic year, the course focuses on helping students obtain places on Level 3 courses or apprenticeship placements.

Objective of the workshop

I was informed that the students would benefit from a session that would boost self-esteem, help them recognise their current behavioural strengths and highlight soft-skills and employability skills.

I arrived to find a class of chatty students who seemed to be looking forward to the morning workshop. We spoke about behavioural differences and how they should be celebrated and recognised. We discussed the difference between behaviour and personality, and they made some good suggestions as to why we behave the way we do and how our behaviours change over time and within different environments.

Exercise 1:  Belbin Team Write – this team game is an effective icebreaker and always interesting in terms of how people work together. The students were asked to work in two teams of 7 with one student in each team being an observer. The object of the exercise is for the participants to hold a pen via eight strings and try to collectively write a word. The observer’s job is to take note of how the team work together, so for example, whether they had a strategy, whether they communicated effectively, did a single leader emerge, did anybody struggle to participate? 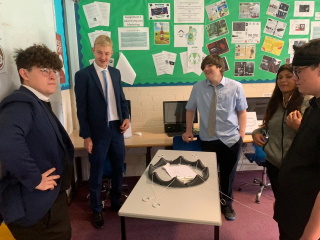 Both teams were very enthusiastic and energetic in their approach and rushed into the task – there was a lot of noise and laughter! During the practice session, they struggled to do the task in hand, and some complained it was too hard and lost interest quite quickly. Afterwards, they reflected how it could be done better. The second time round, they were much quieter and communicated more effectively as a team. Team B even had time to do a 3rd version to make theirs even clearer! By the time team A had finished the second attempt, they had had enough and left it at that!

Afterwards, we questioned how this might represent their behaviours if it had been a real project. The learning point might be that they need to think things through and come up with a strategy before steaming ahead and not to get too disheartened if the first attempt was not successful.

We went on to discuss the nine Belbin Team Roles (they had all completed a Belbin GetSet questionnaire prior to the session and had it in front of them). I highlighted the importance of not boxing oneself into a role – we can display all the Belbin Team Roles, but at varying degrees. The Roles with the highest scores are our preferred roles and the behavioural clusters we tend to project the most. We discussed how to use their personal profiles to help articulate their strengths to potential employers or in cover letters etc.

A section of the workshop was to be dedicated to employability skills, soft skills and Interview skills. A4 sheets with words relating to soft skills had been placed them around the room, for example, resilience, adaptability, positivity, motivation, confidence etc. Each student stood at the soft skill they felt they were strongest in and told us an example of a time they had used that skill. (We did not have time in this session, but I would normally then ask students to stand at the soft skill they feel least comfortable with and discuss.) By this point, the students were really starting to come out of their shells and were showing more confidence.

Following this, we discussed positive body language, including how to present yourself at interview, mirror imaging and active listening. Each student was given a different sample interview question.  We went around the room one at a time and they each gave an example of how they might respond to their questions, while considering their behavioural strengths. The objective of this was to get them thinking on their feet and to help them to understand that they need to be prepared for a variety of questions. We touched briefly on positive mental attitude and how having a bright outlook and finding positive things from each day can help build resilience and increase endorphins and serotonin (your happy brain chemicals!).

We finished with a final team exercise where the students were put back into their original teams and asked to take on ‘Belbin Team Rescue’. The challenge is to lift a red rocket off a large lunar pad with only 5 different sized pieces of thin rope. The rocket must not be tilted or wobbled too much, or an alarm goes off! 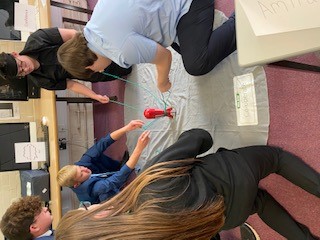 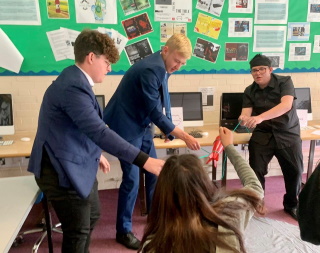 It was very encouraging to see the students actively put into place what they had learnt from the session, thinking their strategy through and trying several different approaches. This is a very difficult challenge and neither team were successful in the time allowed, however the positive re-enforcement was they kept trying and were communicating much more effectively than when they played Team Write earlier.

The students gave very positive feedback and one girl who was very withdrawn to start off with, said: “I now know I am more confident than I thought and can successfully work within a team.”

Other comments ranged from now being more aware of their strengths and how to talk about them and how positive they felt after the workshop.

On speaking to Richard O’ Brien a few days after the session, he commented that another girl who is normally very shy, had seemed so much more comfortable and confident since the workshop and had been ‘literally bouncing around the classroom’.

Richard told me, the day after the workshop, the students subsequently went to work on a community sports project and had reflected on the teamworking element and what they had learnt.  The week after they were doing a works-skills session in their BTEC class and they had used their GetSet profiles to help them write practice job applications.

Measuring the success of the session

The students indicated that 90% of them felt more positive and enthusiastic after the workshop. 85% said they had learnt something new about themselves and had a better understanding of their strengths and 90% said the Belbin GetSet session had encouraged them to think about their future.

We will continue to work with the school and encourage the students to revisit their Belbin GetSet reports as often as they can and add peer/teacher observer assessments in due course.

Keep up to date with the latest news...

By submitting your details you agree to the Belbin GetSet team contacting you. We do not sell, or give, your data to anyone. You can decide not to hear from us at any time, but we hope you find the advice useful. All our data policies can be found here